A Course for Anyone who Hasn’t Studied Computers Before

Most people know what a computer is, how to switch it on, and how to send an email or type a document; but computers can be more “tricky” than that. Things do go wrong; and all sorts of issues can arise that for many can be confusing.

This course was written for people who struggle at times with using a computer; or simply lack the confidence to try doing things or solving problems when they arise.  This may be a very useful course for you, if:

It provides a very solid introduction to understanding both hardware and software. We do assume you have that basic understanding mentioned earlier; but the course can be valuable for anyone from a beginner through to someone who has used computers before but only for very basic things like emails and typing a simple document.

The emphasis is on personal computers (i.e. P.C’s) and while the course is relevant to all types of PC’s using microsoft windows as an operating system.

This course is revised periodically, and underwent a significant overall revision in 2016.

What You Will Do

Start by Understanding the Computer System 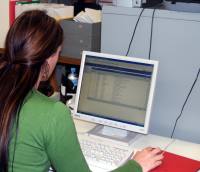 The computer itself is only part of a system.

Put simply, the computer is at the centre of the system. It is a machine that does all the “thinking”. Beyond that, there are all words of other things that connect in and out of the system. Those things are called peripherals.

A peripheral could include any number of devices that are added to a computer system to make it more accessible as a working tool.
Peripherals, like all technology, change and evolve rapidly; today’s latest tools may be out-of-date tomorrow. However, implementing new technology can be a risky, complex, knowledge-intensive and expensive process for a business. For this reason, you will find that many small to medium size organisations and businesses are still using ‘legacy’ technology and older peripheral devices. It is important to understand both the old and the new in order to support computer systems and users effectively.

To help understand this better; it may help to see the computer as being like a human brain, and everything else in the human body is like the peripherals.

At the centre of any computer, you will have software called an operating system.

Software is like the memories that inhabit our brain – the information that drives the computer.

Operating systems are programs that support a wide range of other software programs.

The operating system basically tells the computer how to operate, and how to interact with the other programs installed on the computer.

WHAT THEN ARE OPERATING SYSTEMS?

An operating system will have particular hardware requirements in order to run effectively. These include such things as available disk space, processor speed and available RAM. As operating systems evolve, these demands generally increase, and old hardware is often unable to run newer operating systems. In addition, the advent of smart phones and tablets has resulted in a new range of operating systems, specifically designed with these hardware platforms in mind.